Ivy May EVANS, David Lawrence EVANS and Walter Francis EVANS left London on 3 May 1922 on board the 'Themistocles', bound for Sydney in the company of their parents David Jinkin EVANS and Ivy May LAWRENCE.2

Newspaper reports from August 1921 onwards show a Rosa Ethel STOAKES (soprano) performing in a variety of musical productions, and she is joined by a Jack LEONARD (baritone) from about Mar 1922. This collaboration continues until at least 1927, although they both continued performing as singer and/or dancer into the 1930s.3

He had a defacto relationship with Rosa Ethel STOAKES from about 1936 as Rosa used the name EYLAND, and they both claimed to be married, although no evidence of a marriage has been found.4

He was listed in the 1939 Register at 6 Gunterstone Rd in Fulham, London, Middlesex, with Rosa Ethel STOAKES; he was a theatrical artist.2

Leonard died on 3 August 1967 at Aldingbourne House in Aldingbourne, Sussex, at age 66.6,7

Henry's second marriage was to Laura Lennet GROUT on 15 November 1929 at 10 Ardoch St (Baptist) in Glasgow, Lanarkshire. Henry was a widower, a cooper by trade.1

He married Edith Florence TAYLOR in Birmingham, Warwickshire, on 8 February 1917.3

As of 1922, Murdock Claude FALLA was also known as Stanley Claude FALLA but he had enlisted in the Army as John Claude Murdock (which he later advised them was not his true name). His Army records mainly show FALLA, C.M.2

Murdock's second marriage was to Marjorie FORSAITH, daughter of Ebenezer James FORSAITH and Esther Howson WARD, on 5 June 1926 at the residence of Mrs E J Forsaith in Malvern, Adelaide, South Australia. There are thought to have been seven children from this marriage - Angus, Esther, Eileen, Margaret, Ruth, Beverley and Wallace.2

He married Florence ROBINSON, daughter of William Alfred ROBINSON and Ellen BAKER, in Queensland on 10 April 1901.3,4

She married Hugh Tanner McKECHIE, son of James McKECHIE and Margaret TANNER, in New Zealand in 1923.3

Rita was named executrix in the will of Hugh Tanner McKECHIE dated 24 January 1935 in Seacliff, Dunedin, Otago.4

She was appointed executrix of Hugh Tanner McKECHIE's estate in Nelson on 12 July 1948.4

Philip's marriage to Elizabeth HUTCHINS was registered between October 1855 and December 1855 in Rochford, Essex.1

He was listed in the 1861 census as Head of Family at Farm Cottage in Barling, Essex, with his wife Elizabeth; he was an agricultural labourer and the household included Elizabeth's daughter Sarah SNOW.2

He was listed in the 1871 census as Head of Family in Barling, Essex, with his wife Elizabeth; he was an agricultural labourer.3

He was widowed on the death of his wife Elizabeth before 1881.
He was listed as a lodger in William SNOW's household in the 1881 Census in Great Wakering, Essex, working as an agricultural labourer.4

Adelaide's marriage to George Anthony DOBBINS was registered between July 1945 and September 1945 in Liverpool, Lancashire.5

Adelaide left London on 26 April 1951 on board the 'Straithaird', bound for Sydney, with her husband George Anthony DOBBINS. Their last UK address was 30 Hawarden Ave, Sefton Park, Liverpool, and he gave his occupation as 'electrical engineer.2' 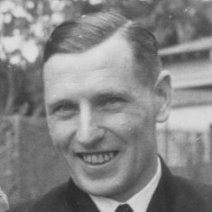 The following comes from a 6p book 'All About Baby', probably written by his mother: "He is called after his father, being the man his mother thought the most of on the wide world. Born at 61 Exeter Drive, Partick, Glasgow on 25th day of January in the year 1912 at 1.30pm o'clock. Born on a Thursday. Thursday's child is merry and glad. He has a mole under his left knee and another on calf of right leg.
Baptised at 61 Exeter Drive on Friday 7th March by Principal McCullough. Baby was carried to the room by his Aunt Tina and behaved like a little swell. His wee cousin Peggy being an interested spectator. Baby's weight: at 3 months 11 1/2 lbs; 2 stone 4 lb at 2 years.
May 18th, Saturday, got his photo taken. His last day in long dresses. First short clothes on Sunday May 19th 1912 (& shoes).
Took whooping cough in August so we did not get holidays. Was not very bad and was as good as gold through it all. He now knows the use of his feet.
Cut his first tooth on Saturday 21 Sept 1912.
Had been walking round the chairs for two months. Auntie Jean sent him off on his own on Sunday afternoon in 848 Argyle St where he was visiting his Grandpa. Took his first step on Sunday April 6th 1913.
He was out in the pram and saw a horse and he said Gee-up, but had been saying Ta Ta and Da Da for a long time, while his wee cousin Peggy taught him to say Chi Chi to Pussy at Christmas. Spoke first word on Sunday March 23rd 1913.
Got his first horse on Friday 7th November 1913. Nearly went off his head with joy. Papa made him a big engine in September, it has a back seat. Named horse Powerful.
The two greatest surprises of his life were when he saw his wee sister in short clothes, and when his Papa shaved off his moustache on Thursday Dec 18th 1913 - did not know him for hours."2

He was a student at Hamilton Cres School and received a reference from Thomas Martin, Headmaster, probably when he left (aged 14), as he felt the school could not teach him much and his parents needed further income on 21 September 1926.3

His mother somehow engineered his employment with the Glen Line out of Glasgow, and his discharge book (issued by the UK Board of Trade, No. R43382 for seaman 263915) shows various engagements up until his Ranginui voyage to New Zealand. These include the Glenardle (Oct 1927 - Nov 1928, 3 voyages as Mess room boy), Arracan (Mar 1929, Apr 1931, 5 voyages as Cadet), Henzada (Apr 1931, Apr 1933, 5 voyages as Cadet) and Ranginui signon (Jun 1936, Able-bodied Seaman).4 His papers include an Argentine Certificate of Identification for Seamen; issued while a Cadet on the Henzada (Henderson Line). Stamps show he visited Argentina in August 1932 and October 1934.5 He was employed by P Henderson & Co as a Cadet until 7 Apr 1933 aboard the Arracan and Henzada.6 He received a Certificate of Profiency as a Watcher in Radiotelegraphy on 25 September 1929.7 Alexander was registered as #35905 on the Register of Midshipmen of the Officers (Merchant Navy) Federation and with the Navigators and General Insurance Co Ltd on 19 April 1933.8
Now in the depths of the depression, and laid off, his Unemployment book shows his registration on 9 April 1935 at Finnieston, Glasgow, Lanarkshire.9

He thought fondly in later years of the time he spent 'on board a yacht during the summer' - the yacht Dorcas, of which he seemed to be the sole caretaker for an absentee owner.10 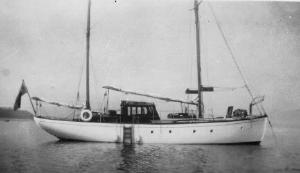 
He signed on as Seaman in Bowling, Dunbartonshire, on 17 June 1936 for the delivery voyage of the scow Ranginui, to New Zealand, although he was really trying to get to Australia. This tiny vessel (105 ft long) took 105 days to reach Auckland after many adventures due to her inability to steer straight (the rudder was too small). The photo shows the Ranginui as she was later altered for the Northern Shipping Co.11,12

Scow 'Ranginui' (as altered for the Northern Shipping Co)

After arriving in New Zealand, Alexander signed on as 4th Officer with the Union Steamship Co on the Marama at Wellington on 21 October 1936.13
Alexander then joined the Union Steamship Co as 3rd Officer on a variety of vessels: Gabriella, Wingatui, Karepo, Kartigi, Tamahine, Omana, Waipori, Waimarino, Kaiwarra.13 He received a Radio-Telegraph Operator's Certificate, Third Class, numbered WN 121 at Wellington on 26 September 1938.14 He received probably his first driver's licence at Christchurch, Canterbury, on 1 June 1939; also a June 1939 licence issued in Melbourne, and another in 1940 in Dunedin.15 Alexander's continued working with the Union Steamship Co as 2nd Officer on a variety of vessels: Poolta, Kakapo, Kaimiro, Karetu, Kaiwarra, Wingatui, Kartigi, Kiwitea based at Wellington from 1940.13,16

He married Berys Hunter MACDONALD, daughter of Arnold Morell (Dick) MACDONALD and Ella Mary MORRIS, at St Luke's Presbyterian Church in Remuera, Auckland, on 13 October 1941. They were attended by Johnnie CRISP and Susan SAMUEL and the reception was held at the Auckland Domain Tearooms.17,18,19 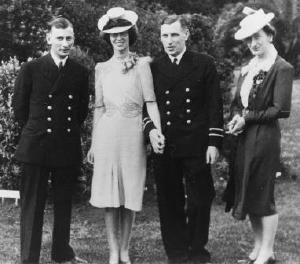 
He received his Master's Certificate (Foreign-going) at Wellington on 19 February 1943.20 He remained with the Union Steamship Co as 2nd Officer on the Kiwitea (acting Chief Officer for the first week) from 1944.13

With a growing family, he now felt it was time to seek a shore job and so worked as a Harbourmaster's Assistant and Dredge Officer at a number of New Zealand ports, including Westport, Dunedin and Nelson.21


He was given authority to wear War Medals, namely the 1939-43 Star Medal Ribbon, Star Medal (and clasp) by the Marine Dept at Wellington on 17 September 1945.22

He received a Restricted Radio-Telegraph Operator's Certificate, numbered NN107 at Nelson on 26 August 1957.14

He was appointed as a Marriage Celebrant on 12 November 1982.23 Stanley Robert CUTHBERTSON and Dorothy May (Doe) McCAFFERY were married by Alexander FERGUSON (as Marriage Celebrant) at Nelson on 26 April 1983.