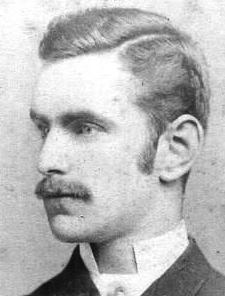 He married Constance Evelyne Legay Hawkins, daughter of Willoughby Legay Hawkins and Fanny Wiggins, at St Margaret's Church in Roath, Glamorganshire, on 1 October 1888.1,5,6
He was listed as a boarder in Jane Eleanor (Ellen) Savours's household in the 1891 Census at Culver House in Michaelstone-super-Ely, Cardiff, Glamorganshire, and gave his occupation as iron-ore importer; his son Gilbert was with him.7

Ernest was the defendant in a strange breach of promise court case at London, Middlesex, on 19 March 1895. One Alice White claimed he had met her in 1888, shortly before his marriage, and had proposed to her in 1894. He claimed she was well aware he was a married man and no such proposal took place. She claimed £10,000 in damages - the jury, after 5 minutes deliberation, decided he was guilty, but awarded her only £500 with costs.8

He served in the Boer War as a Trooper (#13186) in the 52 Company (Paget's Horse), 19th Battalion Imperial Yeomanry, and earned the Queen's Sth Africa Medal Clasp.9

Ernest was separated from his wife, Constance Evelyne Legay Hawkins at Cardiff, Glamorganshire, in May 1905. Constance applied for a separation order on the grounds of desertion, as she had not lived with her husband since shortly after she heard the news of the breach of promise action against him, which had occurred two days before the birth of a child. The court ordered maintenance of £2 per week and costs against Ernest.10

He left Liverpool on the 13 May 1908 on the Friesland, bound for Philadelphia, describing himself as an 'iron master metallurgist.11'

He was convicted of habitual drunkenness and committed to a certified inebriate reformatory at Brentry for 3 years on 5 April 1911 at London County Court in London, Middlesex. This followed a series of arrests for drunkenness from 29 July 1910 until 14 Sep 1910 (when he had variously used the name of James Edwards or Ernest Stewart Fergus(s)on) and a conviction on 8 Nov 1910 for being a habitual drunkard, when he had pleaded guilty on his own recognizance for £5.12,13
He was listed in the 1911 census at H.M. Prison Brixton in Brixton Hill, Lambeth, London, and gave his occupation as 'mining engineer.14'

He left London for Naples on the 10 April 1914 on the Otway - now giving his occupation as Commercial Agent - this would have been only shortly after his release from his 3 years detention.11
He was listed in the 1921 census, boarding at 7-11 Shorts Gardens in St Giles and Bloomsbury, Middlesex, and gave his occupation as 'mineralogist', working on his own account. He also claimed (incorrectly) to be widowed, as did his wife.15

He left Southampton on the 2 June 1925 on the Tambora, bound for Tangier, Morocco - he now claimed to be a mine-owner.11

He was listed in the 1939 Register at 6 St Clares Chamber, Silvester St in Southwark, London, Middlesex; he gave his occupation as 'hawker'.18

Ernest's death was registered between January 1941 and March 1941 in Hammersmith, London, Middlesex.19

Ewen's marriage to Caroline Mary Field, daughter of Richard Field and Susan Fuller, was registered between October 1864 and December 1864 in Hertford, Hertfordshire.4

He was listed in the 1871 census as Head of Family at West Place in Pontypool, Trevethin, Monmouthshire, with his wife Caroline; he was a travelling draper. Their children Alexander, Susan and Richard were listed as living with them, as was Caroline's sister Susan Field.5

He was widowed on the death of his wife Caroline between July 1874 and September 1874.6

He was listed in the 1881 census as Head of Family at George St in Pontypool, Trevethin, Monmouthshire; he was a travelling draper (a shirt-maker). His children Alexander and Augustus were listed as living with him, as was his sister-in-law Susan Field.7

Ewen's second marriage was to Isabella McDonald on 15 July 1892 at Kirkton in Old Kilpatrick, Dunbartonshire. He now gave his occupation as journeyman mason; Isabella had previously been married to a John SCOTT.8

Ewen died on 6 March 1915 at 22 Kirkton in Old Kilpatrick, Dunbartonshire, of a cerebral haemorrhage, with his occupation now stated to be 'dyke builder.9' 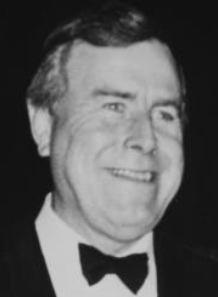 Ewen arrived in London on 19 May 1933 on the Aeneas from Singapore, and returned to Singapore on the same ship, leaving Liverpool on the 4 Nov 1933 with (on both trips) his mother Winifred.2

Ewen arrived in London on the Sarpedon from Singapore on 15 May 1935 with his parents Ewen and Winifred.3

Ewen returned to Singapore, leaving Liverpool on the Hector on 25 January 1936 with his parents Ewen and Winifred.4

Ewen and Donald arrived in Liverpool on 2 August 1945 on the Dominion Monarch from Melbourne with their parents Ewen and Winifred.5

He was educated at Rugby and Oriel College, Oxford and was a rugby cap (5 times) for Scotland (1954) before performing National Service (1954-56) in the 60th Rifles Kings Royal Rifle Corps (2nd Lt).1 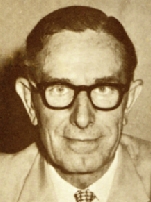 He left London for Singapore on the Delta on 3 December 1920, giving his occupation as accountant.6

He arrived back in London on the Patroclus from Singapore on 25 September 1925, giving his parent's Coatbridge address as his destination. Although he gave his last permanent residence as 'Scotland', occupation 'merchant', he clearly intended to return overseas.7

He and his wife Winifred arrived in London on the Sarpedon from Singapore on 15 May 1935 accompanied by their child Ewen. They now gave their permanent residence as Malaya, although there is no record found of their return to Singapore after their marriage and before the birth of their son.7

He and his wife Winifred returned to Singapore, leaving Liverpool on the Hector on 25 January 1936 accompanied by their child Ewen.9

He and his wife Winifred arrived in Liverpool on 2 August 1945 on the Dominion Monarch from Melbourne accompanied by their children Ewen and Donald. They are on the list of 'Malayan evacuees embarked at Melbourne', but also state their last permanent residence was in Australia. From this we conclude the family must have left Singapore before the Japanese invasion, although they have not been found on any passenger lists of ships leaving Singapore at that time.10

At some point, possibly when he first arrived in Singapore, he joined The Straits Trading Company, a specialist tin mining and trading company, which had been established since 1887 in Kuala Lumpur and later Singapore. He rose to be Chairman of the company from 1947-1965.11

He arrived in New York on 18 April 1948 on the Parthia from Liverpool on a passport issued in Singapore, giving his wife as a contact name at the Straits Trading Co, Singapore. He appeared to be visiting the British Colonial Tin Delegation in Washington and looked to be travelling in company with at least two mine engineers from Kuala Lumpur. His personal characteristics were given as height 6' 1", hair brown, eyes blue.

He made subsequent business trips between the UK and New York in Feb 1950 (arriving on the America, leaving on the Queen Mary) and Jan 1956 (flying BOAC).12 The Queen conferred a Knight Bachelor honour on Ewen, for public services to Singapore on 1 June 1953.13 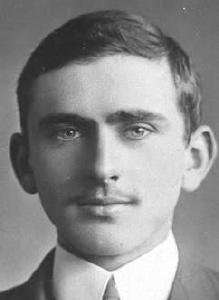 According to family history he did not work for about 15 years after the War, possibly due to bad health. In 1929 he tried to get himself a job in South America, but eventually was employed in 1933 as an engineer at Portsmouth, and by the time of his death was an engineer fitter at the Royal Naval Dockyard.8

He was listed in the 1939 Register at 10 Grange Rd in Portsmouth, Hampshire; he gave his ocupation as a marine engineer and was living in the household of Mr & Mrs ATKINS.9

Gilbert's death was registered between April 1941 and June 1941 at Royal Portsmouth Hospital in Portsmouth, Hampshire, of a gastric ulcer. He never married and left his estate partly to his landlady, probably the Mrs Atkins of 58 Augustine Road, North End, who notified his death.10,8

Honor's marriage to Ronald Selby Smith was registered between July 1922 and September 1922 in Hertfordshire. The engagement had been announced in the Times on 23 Jul 1921.7

She and her husband Ronald arrived in London on 1 April 1932 from Australia on the Moldavia, accompanied by their children Margaret, George and Jeremy.8

She was listed in the 1939 Register at Treyamon Bay Hotel in Wadebridge, Cornwall, with Ronald Selby Smith; they were proprietors of the hotel where they were listed.4

James died on 3 May 1840 at Drumcastle in Rannoch, Fortingall, Perthshire, at age 17.4 He was buried in Kinloch Rannoch.4

(c 1752 - )
Pedigree Chart (interactive)
James Fergusson was born in Moulin, Perthshire, circa 1752.1 and was baptised on 14 January 1753 in Moulin.2
Copyright © 2011-22 by Don Ferguson. You may copy this information and make derivative works as long as you credit www.fergusontree.com for the original materials.