She married Arthur William Traill in Ruapuke on 1 January 1878.2,3

Gretchen died on 11 July 1935 in Ringa Ringa, Stewart Island, at age 82.4 She was buried at the Ringa Ringa Burial Ground.5 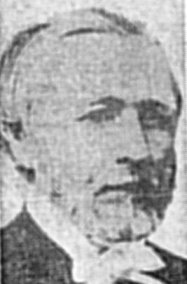 He signed a will dated 10 December 1881 in Invercargill, Southland, in which he willed all his belongings to his wife Eliza and named her as sole executrix.3

His will was probated in Invercargill, Southland, on 3 August 1885 with Eliza Hanham appointed executrix of an estate whose inventory showed bank accounts amounting to £1356/19/9 (less bills of £404), furniture and household goods, 500 sheep, 45 shares in South NZ Finance & Loan Building and Agency Co., and three land-holdings at New River.3

The following biography was compiled by his gt-grand-daughter, Sheila Traill: "Johann Friedrich Heinrich Wohlers, known in New Zealand as John Frederick Henry Wohlers, was born on 1 October 1811 at Mahlenstorf, a village several miles from Bremen in north Germany. He was the son of Johann Gerd Wohlers, a farmer, and his second wife, Margareta Adelheid Ahlers. Young Wohlers was sent to school at nearby Hoyerhagen and while there he lived with his maternal grandmother. On a visit to Vilsen he picked up a German translation of a religious tract and decided to become a missionary. Encouraged by fundamentalist Christians in Bremen, he attended the Hamburg school of the North German Mission Society from 1837 to 1842, and was ordained in August 1842.

On Boxing Day 1842 he embarked on the emigrant ship St Pauli , with three other mission trainees, J. H. Trost, J. F. Riemenschneider and J. W. C. Heine, bound for New Zealand. The immigrants' arrival in Nelson in June 1843 coincided with the Wairau confrontation. Wohlers was one of the few Europeans in sympathy with the Maori involved. The CMS missionary C. L. Reay, the Wesleyan missionary John Aldred, and Wohlers's colleague, Heine, were already established in Nelson, so Wohlers shared with other German immigrants a demoralising attempt at self-supporting farm work in the flood prone Moutere district, while awaiting an opportunity to set up his own mission. In March 1844 he accepted Frederick Tuckett's invitation to sail on the schooner Deborah in an expedition to find a site for the proposed New Edinburgh (Dunedin) settlement. At Port Cooper (Lyttelton) in April he met the chief Tuhawaiki and discussed the possibility of a mission in the south. On 17 May 1844 Wohlers began his 41-year residence on the small island of Ruapuke in Foveaux Strait.

Wohlers's new parish took in, besides Ruapuke's half dozen small villages, all the Stewart Island coastal settlements and those on the other shore from Bluff to Moeraki. Pastoral visits were made on foot and by open whaleboat. The mission enjoyed considerable mana. Ruapuke was without strong leadership after the death in July 1844 of Tuhawaiki, and welcomed the missionary for whom that chief had long been asking. Wohlers set about learning the Maori language and becoming acquainted with local customs. In 1846 he built a church and in 1848 was joined by an assistant, Brother Abraham Honoré, from Jutland. His workload increased in 1849 when he accepted appointments as deputy registrar of births, deaths and marriages for the district of Foveaux Strait, and officiating minister under the Marriage Ordinance.

Wohlers's arrival at Ruapuke coincided with the decline of the whaling industry. Pakeha seamen, who had originally settled on Codfish Island with Maori women, had become boatbuilders and vegetable growers in small settlements on both shores of Foveaux Strait. They supplemented this work with seasonal whaling and, occasionally, sealing. Wohlers noticed that those villages with Pakeha men had more children, and that the children were healthy in comparison with the offspring of Maori partnerships. This he put down to the well-ordered households insisted on by the Pakeha men, and the addition of potatoes and greens to the local diet. He longed to see the Foveaux Strait children educated, but it was to be many years before this goal was achieved.

Wohlers's task was not easy. At times he came close to leaving the mission and hiring himself out as a farmhand; the North German Mission Society, though enlightened in its unsectarian policy, offered practically no financial support to its migrant missionaries. Hamburg businessmen who had formed a colonising society based on the New Zealand Company's programme had given the mission officials an unrealistic view of colonial New Zealand. The missionaries were trained in the useful arts and received a sound general education as well as doctrinal instruction. It was expected that the Lord would provide.

Wohlers needed assistance in the practical aspects of mission life: he sought a wife who would support him in his work, and provide him with companionship. He married Eliza Palmer on 21 September 1849 in Wellington. She was the widow of Richard Woodcock Palmer, a carpenter, whom she had married on 27 September 1838 at Bridport, Dorset, England. She had arrived in New Zealand with her first husband on the Slains Castle in 1841 and had acquired fluency in Maori language. Baptised on 6 September 1812 at Bridport, the daughter of Hannah Hinde and her husband, William Hanham, a labourer, she was an accomplished dressmaker, kind, pious, firm and severely practical, an ideal helpmeet for Wohlers who needed someone with 'the courage of a Rebecca…and the mind of a Martha'. Eliza Wohlers's domestic skills soon made life on Ruapuke more comfortable for all the inhabitants, and Wohlers's health, which had suffered during the early years, improved. Souls aside, the Wohlers undoubtedly saved lives. Eliza Wohlers was kept busy with medicine chest, scrubbing-brush and broom, caring for and counselling people in their own homes, and taking orphans and other needy youngsters into her own. This work she later shared with her daughter Gretchen, also known as Margaret, born at Ruapuke on 31 January 1853. 'I think they love us all', she wrote to the North German Mission Society.

In 1868 a government-funded native school opened on Ruapuke Island, and Wohlers, his wife and daughter were in charge of it from 1870 until 1884. Earlier attempts to establish a mission school had met with mixed fortune. Wohlers always loved learning better than farming, but nevertheless he succeeded in introducing a payable wheat crop to Ruapuke. In this he was greatly helped by ploughs and other equipment donated by his old friend Frederick Tuckett. In education and agriculture Wohlers's contribution was not of lasting benefit. After his death Ruapuke's population declined: the school closed, and much of the land gradually reverted to scrub. His enduring legacy was a huge body of manuscript and published writings. He left, in reports to Germany and letters to W. B. D. Mantell and F. Tuckett, a full account of life and lore in the south. He corresponded with Julius Haast on scientific matters and sent specimens of fauna to the Canterbury Museum. Often Wohlers wrote down Maori traditions and mythology and in some cases arranged for their publication. He provided George Grey with some of the information used in Polynesian mythology. He also wrote an account of his life, Erinnerungen aus meinem Leben , which was published in German in 1883 and in English in 1895 as Memories of the life of J. F. H. Wohlers .

It is difficult to assess the impact of Wohlers's religious teachings on the Maori. There was no word for 'hope' in the local dialect; the dying, formerly left to themselves with a cold potato and a drink of water, may well have felt that Wohlers's 'lieber Gott' had something to offer. Whatever the case, when Wohlers himself died at The Neck, Stewart Island, on 7 May 1885, those he left behind were inconsolable. Eliza Wohlers died 6½ years later, on 14 December 1891, at Thornbury, Southland. Husband and wife are buried at Ringaringa, Stewart Island, across the water from Ruapuke."5

Pedigree Chart (interactive)
Lydia's marriage to Reginald Biggs Clarke, son of Samuel Ludbrook Clarke and Mary Lee (Hannah) Christopher, was registered between January 1911 and March 1911 in Kensington, London, Middlesex. There were no children from this marriage.1,2

She was appointed administrator of an unknown person 's estate in London on 28 June 1919.5

She married Edward Blomfield Clarke, son of George Clarke and Martha Elizabeth Blomfield, in Sydney, New South Wales, in 1857. There were no children from this marriage.4,5,1

He married Emma Wicks, daughter of Sidney Buckingham Wicks and Harriet Tippett, in New Zealand in 1924.3

She was widowed on the death of her husband Denis in 2002.3

He was listed in the 1939 Register at 10 Harold Rd in Portsea Is, Hampshire; he was working as a carpenter and joiner, as were his brother and father (a stage carpenter).4

Charles's marriage to Joan Rust, daughter of Albert Frederick Rust and Ethel Mary Larkin, was registered between April 1942 and June 1942 in Surrey.5